Lukas Stefanko, an IT security researcher at ESET has discovered 9 Android apps on Google Play Store spamming users with unwanted ads. One of the apps called “Remote control for TV and home electronics” has been installed by more than 5 million users while in total all 9 apps have been installed by 8 million users around the world. This is the second time in one week that adware apps have been found on Google Play Store.

According to Stefanko, none of the apps actually work and their sole purpose is to bombard users with ads to generate revenue for app developers. It is noteworthy that these apps have been developed by Tools4TV, an Android developer that has been active since 2015. 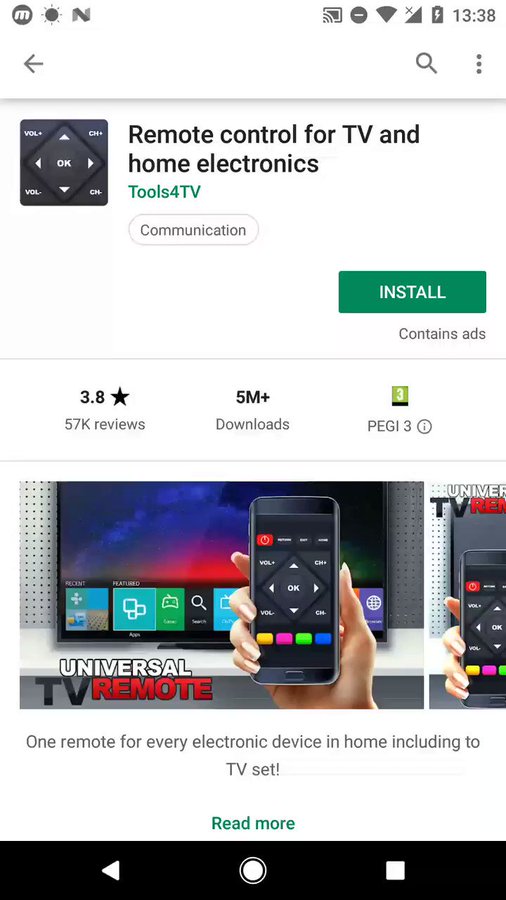 Unwanted code is hidden in “not working” apps that once launched, hide itself from user’s view and display ads.
All these apps are fake without any promised functionality.

The unwanted code is hidden in “not working” apps that once launched, hide itself from user’s view and display ads. All these apps are fake without any promised functionality,

This is the second time in a week that researchers have reported the presence of adware apps on the Play Store. Last week, the IT security researchers at Trend Micro revealed that there were 85 adware infected apps on the marketplace bombarding around 9 million Android users with full-screen unwanted ads.

All 85 apps (developed by two different Android developers “Alger games and Kodev”) were then removed by Google however it is unclear whether there is a connection between apps reported by Trend Micro and Lukas Stefanko.

At the time of publishing this article, Google has booted out Tools4TV along with their apps from the Play Store. To protect yourself from malware and adware apps avoid installing unnecessary apps from Google Play Store or from a third-party marketplace.

We suggest sticking to trusted developers and brands and only download an app after going through its review section. Moreover, installing a reliable antivirus would also be helpful in thwarting impending attacks. Here is a list of 10 powerful antiviruses for Android, iPhone, Mac, and PC

by IT Blogr
Keep Reading

Google is acting on its promise to kick deceptive websites to the curb.

The newly released Chrome 71 now blocks ads on “abusive” sites that consistently trick users with fake system warnings, non-functional “close” buttons and other bogus content that steers you to ads and landing pages. The sites themselves won’t lose access the moment Google marks them abusive, but they’ll have 30 days to clean up their acts.

The browser has more safeguards, too. Chrome will warn you when a site appears to be hiding the real costs and terms for a transaction. If a site is trying to rope you into a subscription without telling you that you’ll be charged, you might get an alert that could save you a lot of money. Google will try to get in touch with affected sites to have them modify their sites, but they’ll have to appeal the decision to have a chance at lifting the warning.

Chrome 71 is available now for Linux, Mac and Windows, and it’s rolling out to Android and iOS users over the course of the weeks ahead. Google hasn’t detailed everything that’s new, but the efforts to thwart malicious sites are clearly the highlights. The company has moved from blocking obvious threats like malware to the sneakier tactics that may not compromise your computer, but could prove annoying at best and costly at worst.

by IT Blogr
Keep Reading